Wild animals in the OCEAN 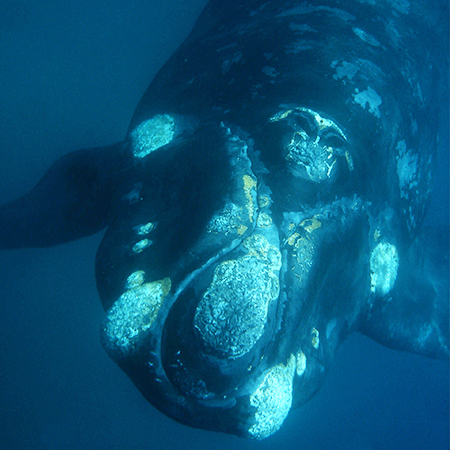 The average length in adult whales ranges between 14 and 15 meters. Females are slightly larger than males, which do not usually exceed 15.50 meters. The largest whale found was an elderly female measuring 17 meters long.

The average weight of adult whales is between 40 and 50 tons. Calves are born between July and September after a 12 months gestation, at birth they measure between 3 and 5 meters, and weigh between 2 and 3 tons.

Breast milk, very rich in fat, makes them grow about 3 centimeters a day during the first three months of life, doubling in size in that period. The lactation period lasts one year, although the calf can stay with its mother for a longer time.

During the lactation period the calves can also alternate their diet sporadically consuming zooplankton. Southern right whales usually reach reproductive maturity at the age of 6, and females give birth every 3 or 4 years. 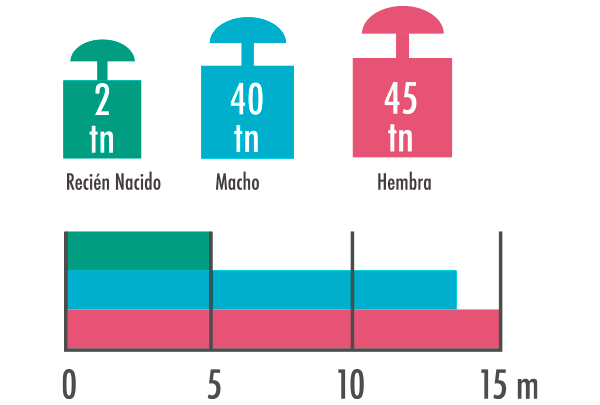 How to observe them

Land based whale watching can be enjoyed from June to December from various beaches and cliffs of Valdes Peninsula, and between June and October at El Doradillo Natural Protected Area. Occasionally this whale can also be seen in other points of the Argentine coast in Santa Cruz, Río Negro and Buenos Aires.  From June to December, whale watching boats depart from Puerto Pirámides to bring people close to these gentle giants.

The name Southern Right Whale (Eubalaena australis) derives from the Greek eu (= true) and the Latin balaena (= whale). The second term, australis, also derives from Latin and refers to the geographical origin of the first specimen found.

Southern right whale is distinguished from others by

The callosities on its head

Large, broad pectoral fins, which have a rectangular shape

A round body, which tapers to a relatively narrow tail stock.

Dark skin with irregular white patches on the throat and belly. There are also gray whales (grey mprph) with dark spots and a small percentage of white individuals with black spots.

Large head measuring up to one-third its body length, with callosities distributed behind and in front of the blowhole, above the upper jaw, on the edge of its lips, at the end of the lower jaw and over the eyes, like  large eyebrows. These callosities are colonized by thousands of small crustaceans called chiamids, which give them that yellowish-white color. The distribution of these callosities allows individual identification.  From its upper jaw hang 220 to 260 pairs of baleens, the ones in the center of the mouth are the longest, measuring more than 2.5 meters in length in adult whales These baleens allow whales to filter zooplankton.

Seen from behind or from the front, the blow is V-shaped.

Several characteristics made Southern Right whales a favorite target for whalers. They are slow animal who swim at a speed of between 5 and 10 km/h, they float when they are dead (unlike the rest of the whales, who sink) and from the large layer of blubber that covers them, whalers were able to get around 40 barrels of oil (about 7,200 liters). For these reasons the species was named “right whale”: the right whale to hunt.

It is estimated before commercial whaling targetted this specie, there were at least 100,000 right whales living in the Southern Hemisphere. Unfortunately, this population was devastated by whaling during the 18th and 19th centuries.  The International Whaling Commission (IWC) banned Southern Right whales captures in 1935, but illegal hunting continued during the 1950s through the 1970s, delaying the poulation’s recovery.  The IWC Scientific Committee estimates that the total number of Southern Right whales in 2009 was approximately 13,600 individuals. This number is close to 20% of pre-whaling population estimates. The abundance estimate for Southwest Atlantic population (Argentina and Brazil) was 4,000 whales in 2010. Between 1971 and 2010, the population increased at an average annual rate of around 6%.  Chubut’s Southern Right whale population doubled in the past two decades and is now colonizing new areas off the Argentine coast. 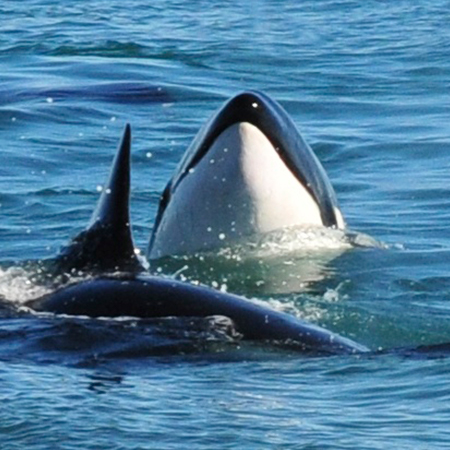 Males in this population can reach up to 9 meters in length, and weigh 9 tons. Females are slightly smaller; they do not exceed 8 meters long and weigh about 5 tons.

Females reach sexual maturity at 12, and have the longest post reproductive life span of all nonhuman animals: they stop reproducing in their 40s but can survive into their 90s.  They can give birth to 4 to 6 offspring over a 25-year span, with an average of 5 years between births. The gestation period is one of the longest, lasting 17 months and can extend up to 18 months, after which they give birth to a single calf (although there is one record of twins in Canada). Breastfeeding lasts one year

Males reach sexual maturity between 12 and 14 years, when their dorsal fin begins to grow taller and straighter, but become fully sexually mature at age 20. 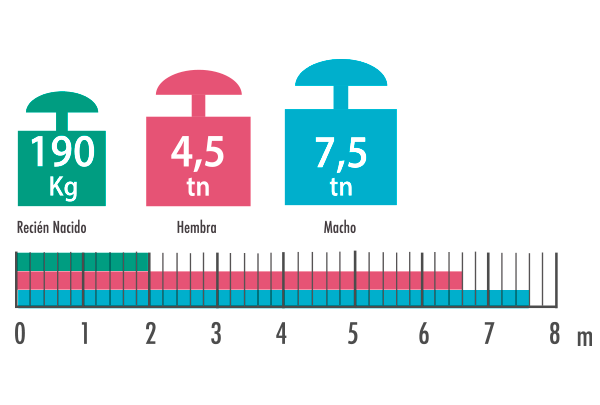 Where to watch them

Orca whales can be watched either on board or from the coast in different parts of the world, the best known being the west coast of Canada and the United States, Norway, the Strait of Gibraltar, Alaska, Antarctica, and Peninsula Valdes.

The Latin name Orcinus translates as “of the kingdom of the dead” or “belonging to Orcus”. Orcus was a Roman god of the netherworld, and this genus name is likely a reference to the hunting strategies.

Spanish whalers of the 15th century who watched the orca feeding on big baleen whales, called them asesina de ballenas, or “whale killer” – a term that was eventually flipped around to the “killer whale”.

Now we know that orcas are not killers, and that they are not whales, but rather they are dolphins, the largest member of the delphinidae family.

It is easy to identify the orca by its striking coloration: black on top and pure white below with a white patch behind each eye, another extending up each flank, and a variable “saddle patch” just behind the dorsal fin which, in males, can be 2 meters high.

How to watch them

From the February to mid-May, they can be observed from the cliffs at Punta Norte, performing the intentional stranding technique in the sea lions colony.

In October and November they can be seen, from the coast, feeding on the elephant seal colonies of the Southeast and East of Valdes Península.

Occasionally dolphins can be seen during the whale-watching and boat tours that depart from Puerto Pirámides. The two species that we usually find are Dusky dolphins and Common dolphins. 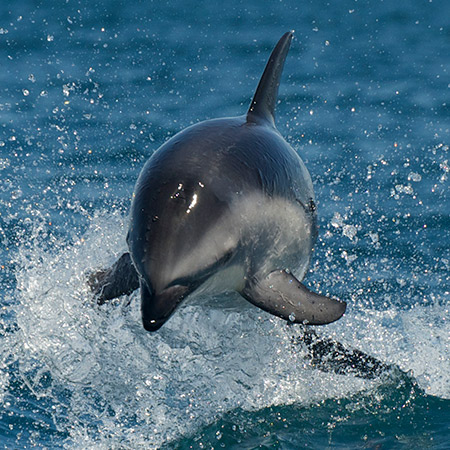 Dusky dolphins have virtually no beak, and their dorsal fin is not hooked and rather blunt. They are a bluish-dark grey color on the back and tail. A dark band runs diagonally across the flanks from below the dorsal fin towards the vent and along the tailstock. The underside of the body is white, and whitish-grey color extends over the flanks.

Dusky dolphins eat a wide variety of fish including schooling fish such as anchovies, mackerel and sardines pelagic fish and deeper water fish such as hake and a number of squid species.

Females reach sexual maturity at the age of 6-7 years and have their first calf at the age of 7 – 8. They give birth every two to three years, during the spring and summer.

Dusky dolphins are master acrobats; they delight the passengers with their spectacular acrobatic behavior, which includes high water leaps and aerial displays. They like to play with the wakes d by the boats and to bow ride. 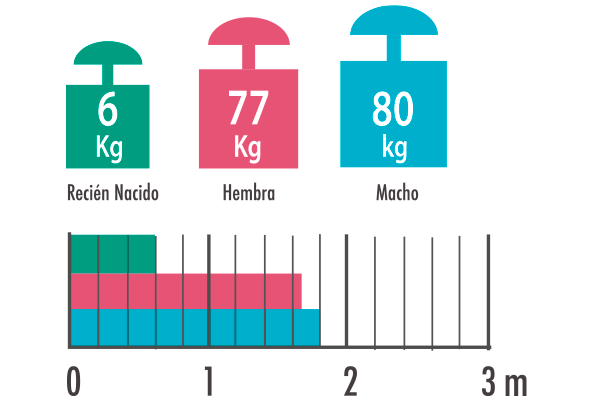 This dolphin is recognized by its unique color pattern; the back is dark gray-to-black from the top of the head to the tail dipping to a V on the sides below the dorsal fin. The flanks are light gray behind the dorsal fin and yellowish-tan forward of the dorsal fin, forming an hourglass pattern. Its belly is white.

There are large dark circles around the eyes connected by a dark line that runs across the head behind the beak and a black stripe runs from the jaw to the flippers.

They feed on small fish such as anchovies, sardines, and other small pelagic fish.

Both males and females reach sexual maturity between 5 and 10 years of age. Gestation lasts about 11 months and the calves are breast fed for 10-11 months, although at 3 months they begin to eat solid food to complement lactation.

They are usually found in groups of 20-30 individuals, although sometimes several herds swim together, grouping hundreds of dolphins, which is an incredible spectacle to see.  These dolphins are fast swimmers; they show an acrobatic behavior and often bow ride.