Wild animals in the STEPPE 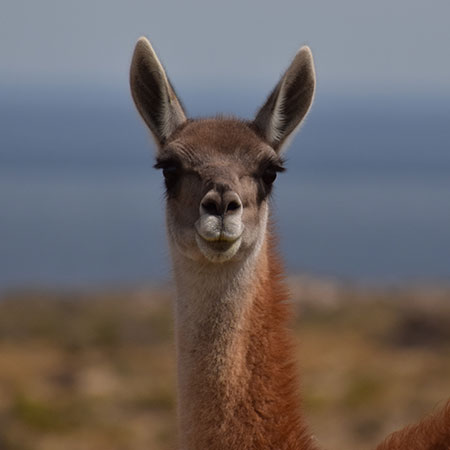 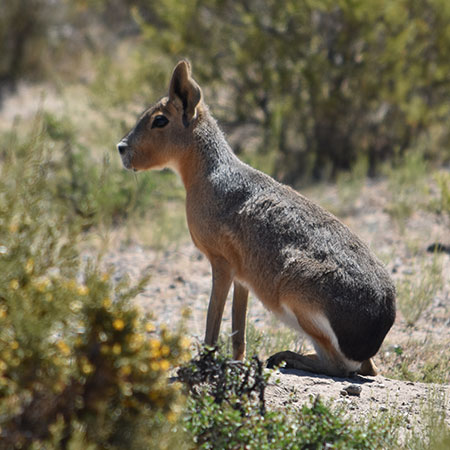 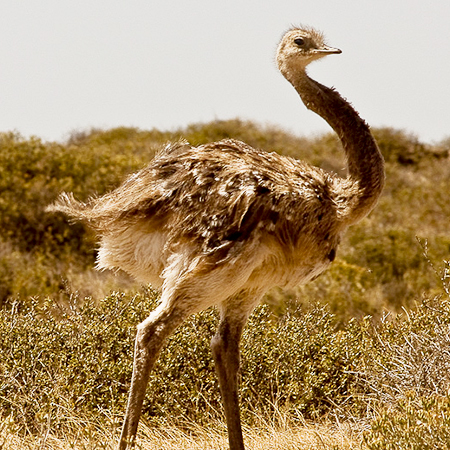 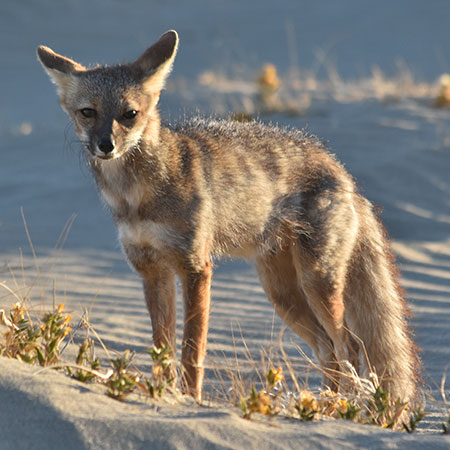 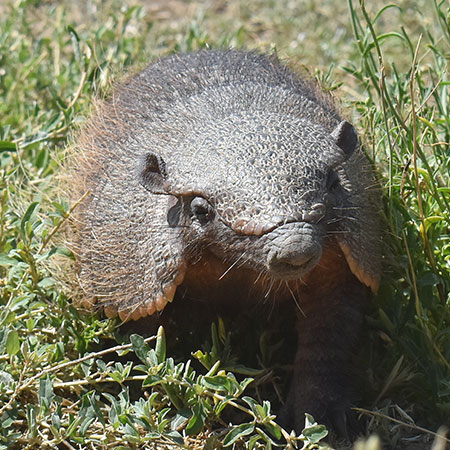 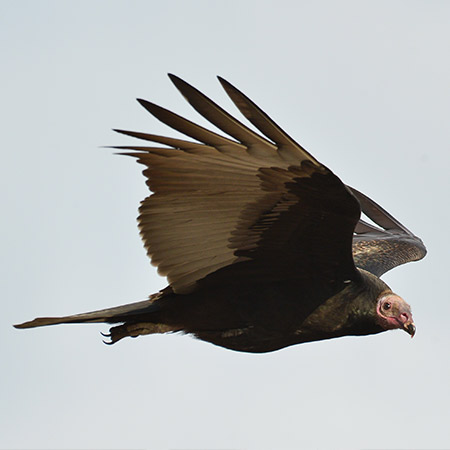 Near Puerto Pirámides and inside Valdes Peninsula we find a great diversity of terrestrial animals that inhabit the steppe and can be seen while traveling the internal gravel routes.

Guanacos have long, slender necks and long legs typical of camelids. Adults are 130 cm high at the shoulders, and adult body mass is between 90 and 140 kg. Their pelage is light to dark reddish brown, with white countershading on the chest, belly, and legs, and gray or black coloration of the head. Aggressive behaviors seen in male guanaco include spitting (up to 2 m.)

Guanacos reproduce seasonally and there is one breeding season per year. Mating occurs in family groups during the austral summer, typically between early December and early January. The gestation lasts almost a year and they give birth to a calf that weighs up to 15 kg. The calf is called “chulengo” and is milk-fed by its mother for about a year.  They live in groups with a dominant male and several females with their young.  Groups of single males and single females are also found. They eat grasses and herbs.

Mara is one of the largest rodents in the world, measuring between 69 and 75 cm long with an astounding average weight of 8kg (10 lb.) although they can reach a Females produce one litter each year in the wild, after 100 days of gestation.

They usually give birth between 1 and 3 young per litter, which they feed three times a day in their underground burrow, until weaning occurs at th age of 9 months.  Maras are monogamous, a rare occurrence among rodents. In a colony, when the parents go out to carry out their activities, a female is left in the care of all the offspring by organizing a nursery.  It is an endemic rodent of the steppe region. It feeds on flowers, seeds, fruits and grasses.

Rheas are large flightless birds native to South America, distantly related to the ostrich and emu.They have a grey-brown plumage, long legs and long necks, similar to an ostrich. Large males can reach 170 cm (67 in) tall at the head, 100 cm (39 in) at the back and can weigh up to 40 kg (88 lb).
They are fast runners, reaching 60 km/h. Breeding begins in July. The male attracts a harem of 2 to 6 females with whom he mates. Female lay the eggs into the nest, and the male incubates from ten to sixty eggs for about 40 days. The male will use a decoy system and place some eggs outside the nest and sacrifice these to predators, so that they do not attempt to get inside the nest. The males tend to get very aggressive when they are incubating the eggs.

Adult grey foxes are 40 – 60 cm long without counting its tail, which measures around 30 cm and can weigh up to 4 kg. It is solitary and usually nocturnal specie which feeds on small and medium-sized rodents, birds, reptiles, insects, fruits and carrion.  The reproductive season begins with the matings between August and October. Gestation lasts between 53 and 58 days, after which 4 to 6 cubs are born. Both parents raise the young.

Adults are 40 – 49 cm long and weigh between 1.5 and 3.6 kg. Armadillos are the only living mammals that wear such shells. Closely related to anteaters and sloths, armadillos generally have a pointy or shovel-shaped snout and small eyes and long, sharp claws for digging

They live in underground burrows, they are good diggers and are more actives at night, during the day they stay in their den.  Armadillos reproduce in spring. The gestation lasts between 60 and 75 days, after which females give birth to two to three young, which they breast-feed for two months.  They are omnivorous and also feeds on carrion.

The turkey vulture is a scavenger and feeds almost exclusively carrion. Thanks to its excellent vision and sense of smell, it can locate carcasses from a high-altitude flight. Despite having an appearance similar to that of vultures, it is not related to them, instead it is closely related to the Andean Condor.  In Puerto Pirámides there is a colony of jotes that lives on a dry tree, which we consider part of our natural heritage.